The Republic of the Philippines

A sovereign state made up of 7,107 islands. The country has three main geographical areas, these are Luzon, The Visayas and Mindanao.

The capital city of the Philippines, Manila located in Luzon, is just one city that makes up metro Manila, the other 15 are Quezon City, Caloocan, Las Piñas, Makati, Malabon, Mandaluyong, Marikina, Muntinlupa, Navotas, Parañaque, Pasay, Pasig, San Juan, Taguig, Valenzuela and the municipality of Pateros. This can be quite confusing for international visitors who often do not stray out of Makati.

Seven Seas Dive Center, and its sister companies in the Seven Seas Aquanauts group are all located on the island of Cebu, a smaller and easier island to travel to and in, this is located in the central Visayas.

Seven Seas Dive Center, is next to Cebu (Mactan) International Airport in Lapu Lapu city, Mactan Island, which is connected by two bridges to Cebu City. Savedra and Cebu Fun Divers are both in Moalboal, some 100 KM south of Cebu city, easily reached by road.

Mindanao is an island in the far south of the Philippines, this island is somewhat infamous for the unrest that has been ongoing from the 1960’s between government forces and, (primarily) the Moro Islamic Liberation Front.

Whilst the picture presented by the media would be naturally worrying from the outside, and the warnings provided by embassy’s naturally cautious, it is our opinion that this conflict does not present a threat to tourism in Cebu, and is almost completely contained to the Mindanao region. There are many that would suggest parts of Mindanao, Davao for example, are among the safest places in the Philippines to visit. 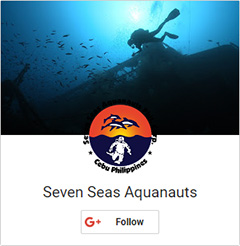